Happy Anniversary to all witizens and friends of Wirtland! 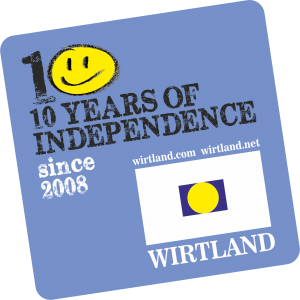 Today Wirtland is turning 10 years old. Ten years is substantial period for everyone; for a virtual state it is a record-braking lifespan.

Wirtland has managed to carry its flag and to survive through a turbulent decade, marked both by  tremendous geopolitical changes all over the world, and remarkable progress in IT technologies penetrating the daily lives of everyone.

We are pleased to observe that the ideology of Wirtland has remained attractive,  as we have been happy to welcome new citizens every week, coming from literally every corner of the world.

Thanks to this constant influx of new people, Wirtland is now accumulating more innovative ideas than ever. Wirtland is a country which helps our citizens to make their ideas real.